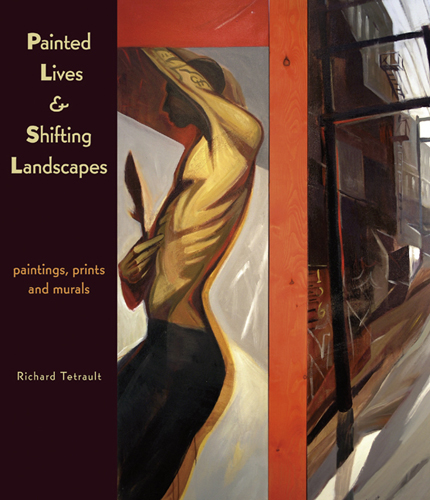 Painted Lives & Shifting Landscapes showcases the artwork of Vancouver painter, printmaker and muralist Richard Tetrault. Tetrault’s work explores universal themes of the figure and the urban landscape. From Berlin to Bangkok to Vancouver, his artwork revisits these themes over thirty years. His imagery is at its most direct in street drawings and paintings, more symbolic in monoprints and studio work, and most iconic in woodcuts and linocuts. While Tetrault’s studio work reflects the urban setting, his murals are a direct attempt to influence the physical texture of the street. Numerous mural projects and collaborations bring the artist face-to-face with the edginess and the creative spirit of Vancouver’s Downtown Eastside.

“Tetrault’s murals don’t replicate grim reality. Mind you, neither do they sanitize. Let us say, instead, these portraits of the city are both true and transformative.” âVancouver Sun

“Tetrault’s abilities as artist, mentor and friend bring the creative centres of the mural painters…to the bold and dignified exterior of the canvas.”
âPamela Fairfield, Curator, Interurban Gallery

Richard Tetrault has received numerous grants for his exhibits and public projects, including a five-month residency in Germany, a Canada Council Grant for an exhibition in Asia, support for touring exhibitions in Mexico and Africa, and grants for mural collaborations and workshops. These murals are visible throughout the Vancouver area, in community centres, public housing developments, banks, and schools.