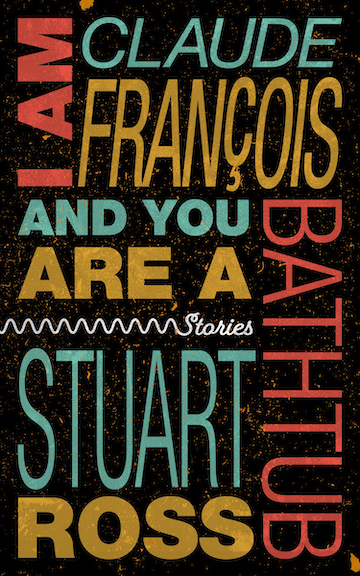 I Am Claude FranÃ§ois and You Are a Bathtub

Stuart Rossâs sometimes poignant, sometimes outrageous third story collection deepens his exploration of the possibilities of the short story and narrative. A trio of tales probe fame through the lens of 1960s-70s French pop and disco icon Claude FranÃ§ois; legendary Hollywood actor Lee Marvin saves the day, again and again; the citizens of a small town worship an all-knowing potato; a man dons a bib to devour his neighbourâs house; a tourist finds both love and a dead frog in Nicaragua; and, in one particularly educational anti-story, the author instructs readers in the art of writing the short story. In I Am Claude FranÃ§ois and You Are a Bathtub, Ross, a veteran of the Canadian literary underground, unleashes his arsenal of pathos, absurdism, humour, and cantankerousness.

PRAISE FOR ROSS’S PREVIOUS SHORT FICTION:
âThe power of each one of those tiny little chapters [in Pockets] just sneaks up and knocks the wind out of you. Iâve never read anything like it.â
âMichelle Winters, author of I Am a Truck (CBC News)

âThese untitled micro-chapters [in Pockets] fit together like Lego blocks built by William S. Bourroughs and his wild friend Brion Gysin. Stuart Ross simply never fails to delight, surprise and inform as he entertains.â¦ Ross is most likely going to take you out of your range of reason and then back in before you can blink.â
âMichael Dennis, author of Bad Engine (Todayâs Book of Poetry)

âStuart Ross’s writing is a life raft with a clown on it.â
âDomina Eliahou-Cyrus, bassist for Bitch Stick

âRoss doesnât waste a word, and the impact is often breathtaking. He knows how to extend a metaphor so that even the most absurd or hallucinatory episodesâand there are many of theseâconvey deep meaning.ââ¨âSusan G. Cole, NOW