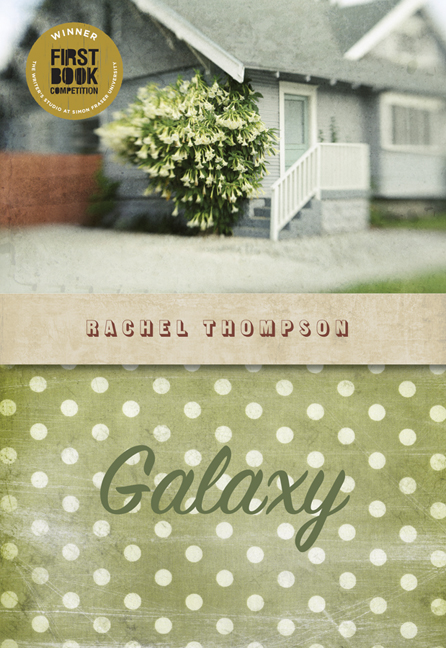 Galaxy is about a wounded family (Anger brimming until it overflows / into rage in the dark living room, / his undershirt soaked through / up the back to his collar), a prairie place (Ochre River girls / have a one-room school, / walk through fields of wheat, / play in silos, storing grain dust / in their lungs, / later to exhale it / like cloudy fire), love that is queer and conventional, about longing and loss (tempus fugit / my father emails, / now or never, / and I canât I donât / wish to speak to my mother. / I donât believe the mere flight of time / is reason enough) and a light shone into dark corners.

Galaxy is âemotional biographyââas Magaret Laurence called itâ(Sometimes I have breathed flame, / I admit that my wordsâprovokedâ / have burned) where the facts are fabricated (âtell it slant,â said Emily Dickinson), but the feelings are authentic.

“A truly wonderful collection of poems. Wonderful and clear imagery as well as a ârealâ and âtrueâ sense of place, love, longing, family, and the constant struggle and re-negotiation of self and experience. Galaxy possesses a simple but sensual approach to language and tone.â
âGregory Scofield, author of kipocihkan: Poems New & Selected

Rachel Thompson grew up in Dauphin, Manitoba, located at the foot of Riding Mountain National Park, aka the Galloping Goose of Margaret Laurenceâs books. She went to the University of Winnipeg, majoring in English and International Development Studies. After moving to Vancouver in the early 2000s, she took part in the award-winning Writerâs Studio program at Simon Fraser University. She completed Galaxy at the Banff Centre for the Arts Wired Writers program. Her poetry has appeared in journals in Canada and abroad.