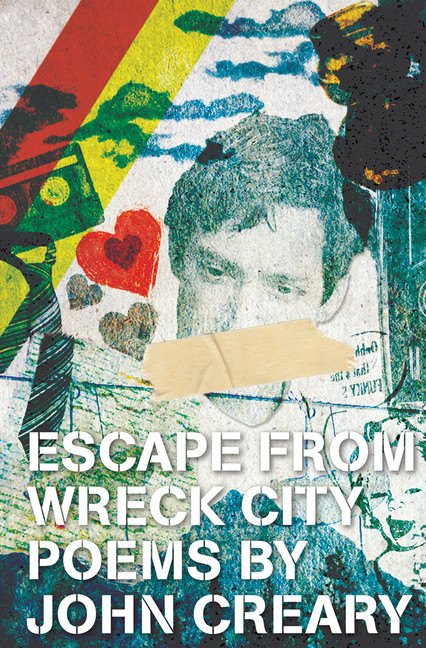 This debut collection features poems about nature, poems about love and relationships, poems about living in the city, and poems about traveling the globe. And all at once they capture the thrill of being fully engaged with the world, keenly observing each moment and event that constitutes being human. Whether itâs following the âwounded insomniacâ through the âdesert lushness of sage and creosoteâ or hot lovers who âflicker bareback beneath the full moon, pantingâ or drifting, moribund couples on empty streets moving like âdead meat or heavy trafficâ under leaves of an âelectric yellowâ Crearyâs language is potent, lush, playful, witty, and demanding of attention.


Sharp with insights that cut to the core of the matter, the poems in Escape from Wreck City â like the people who inhabit them â are ecstatically alive.


PRAISE FOR
ESCAPE FROM WRECK CITY


“John Creary doesn’t seem to have a slower gear or a dimmer switch. If he’s driving it is full speed and right off the end of the cliff if necessary, with the lights on high beam, of course. … But man oh man oh man this Creary cat is one silver-tongued flim-flam trapeze high-flying crazy Wallenda carnie-barker. There’s as much entertainment in almost any poem you choose from Escape from Wreck City to keep the lights burning in a modestly sized town.”
— Today’s Book of Poetry, blog


âJohn Crearyâs poems growl, roar, whisper, chortle, purr and shout. Heâs a writer stoned on words, constantly surprised by what they can and canât do. Languageâs energyâclean, dirty, pulsing, spiking, minimalistâvibrates through Escape from Wreck City.â
— TOM WAYMAN, author of The Order in Which We Do Things

John Creary has had his poetry widely published in Canadian literary journals including The Best Canadian Poetry in English 2011, Arc, Event, Grain, CV2, Fiddlehead, Vallum, subTerrain, and The Antigonish Review. He was awarded the Calgary Literary Kaleidoscope Undergraduate Award for Creative Writing in November 2008. Escape from Wreck City is his first book. He currently lives in Calgary.