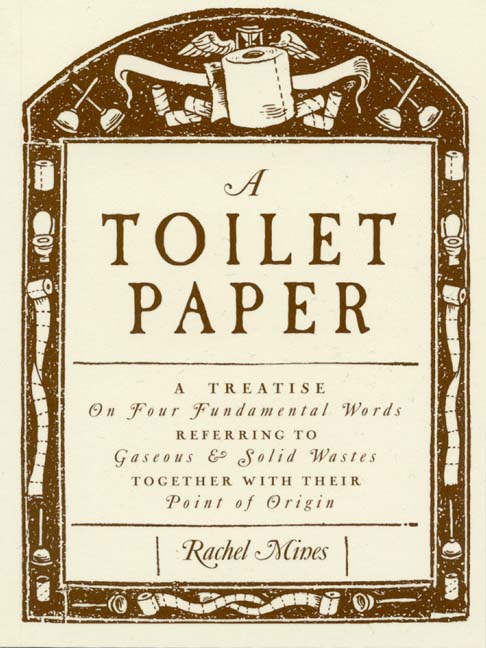 A Toilet Paper : A treatise on four fundamental words referring to gaseous and solid wastes together with their point of origin

A Toilet Paper is a humorous examination, from a historical linguistic viewpoint, of four commonly used words relating to our posterior orifice and that which comes out of it.


âGaps, blank spaces in the language of polite conversationâacademic discourse being but one exampleâare linguistic manifestations of human psychology. They are like black holes into which we conveniently drop undesirable concepts referring to things we fear on the deepest levels, things we would rather not face without a hedge of psychological defences: sex, death, bodily wastes, things unmentionable in polite society. But these things do not go away by virtue of their unmentionability; and neither do the words referring to them, though most are now relegated to the status of street language, slang, or âobscenity.ââ
— FROM THE INTRODUCTION


ââ¦ I learned a great deal from this book â¦ the Indo-European roots of the four fundamental words it discusses, for example, and therefore their cultural antiquity, ubiquity and historicity that most dictionaries, interestingly enough, didnât begin to suppress until the oh-so-politically correct nineteenth century of European colonialism. Another is the fact that Shakespeare, despite his reputation for ribaldry, was actually far more of a prude than Chaucer, the father of the English language.â
— Karl Siegler, Editor (and former Publisher at Talonbooks)