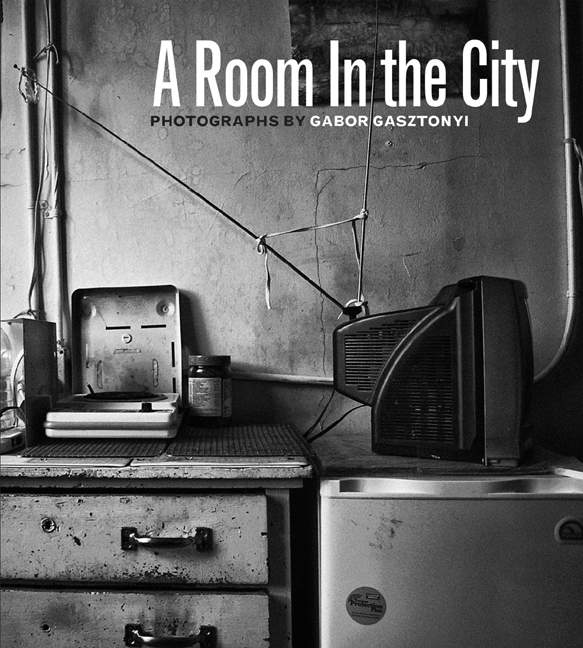 A Room in the City

A Room in the City presents Gasztonyiâs five-year project of photographing the residents of the Cobalt, Balmoral, Regent, and Sunrise Hotels in Vancouverâs Downtown Eastside, the poorest postal code in the country. They are represented in private moments, with respect and dignityâin their rooms and on the streetsâas they wish to be seen. Gasztonyiâs style continues in the great documentation tradition of Anders Petersen and Josef Koudelka, the photographer of the Roma.

Accompanied by a selection of Gasztonyiâs diary entries, and poems, the photographs in A Room in the City are complex and varied portraits of people who often go unnoticed or ignored. Gasztonyiâs arresting images urge us to look longer, harder, and deeper at a city often deemed one of the âworldâs best places to live.â His unflinching eye insists that we more closely examine a culture where the chasm between have and have-not grows ever deeper, to consider how we are both implicated and removed from the lives of our neighbours.

Excerpt from âImages of our Shadow Side,â the foreword by Gabor MatÃ©:
â… No words can fully capture the experience of abuse, trauma, degradation, and shame that has characterized the lives of my patients and Gabor Gasztonyiâs subjects… If anything can, it is Gaborâs photographs that bring those sad lives into the sharpest relief, for in each photo, in each look, in each gesture, there is a full life.â

Best of 2010 Non-fiction
âA Room in the City is a haunting collection of photographs by Gabor Gasztonyi. … Thereâs more here than prostitution and crack pipes, although theyâre in evidence. Whether confronting the lens or averting their gaze, the subjects expose their vulnerability but also their attachment to another human being or a cosseted pet. In the bookâs foreword, addiction expert Gabor MatÃ© notes that for many of these people, mental illness or substance abuse is a response to trauma. âTheir entire life,â he adds, âhas been one of survival against odds.â Weâre left wondering how people have to live this way in Canada.â
âUptown Magazine

âGabor Gasztonyi spent five years photographing and talking to the men and women of Vancouver’s Downtown Eastside, and A Room in the City is the mesmerizing result. The black-and-white images, and Gasztonyi’s diary entries, forcefully and unforgettably capture the desperationâand the unexpected glints of dignity and joyâof lives ravaged by poverty, drugs, mental illness and social dislocation.â
âThe National Post

I had a friend from out of town visit last week, and on her first night in Vancouver, she folÂ­lowed her GPS through Hastings and was terÂ­riÂ­fied by the scene made more surÂ­real by a body under a white sheet that was rolled out of an SRO while she waited for the trafÂ­fic light to change. A couÂ­ple days later, she saw my copy of Gasztonyiâs book on my cofÂ­fee table where Iâd left it, and so she picked it up and started to read it. At first she was frightÂ­ened, and then she had quesÂ­tions, but by the end of it she felt that she underÂ­stood the sitÂ­uÂ­aÂ­tion much betÂ­ter and she was no longer scared. Now thatâs a powÂ­erÂ­ful book!â
âGeist

Gabor Gasztonyi has had exhibitions across Canada, including Vancouver, Montreal, and the Arta Gallery in Toronto in 2008. His awards include The Professional Photogaphers of BC Nikon Prize, Society of Canadian Artists Award of Excellence, runner-up Magnum Scotia Bank Scholarship, and a Canadian nomination for the International Black & White Spider Awards in 2008. He operates a photographic studio and Art Gallery in New Westminster, BC.