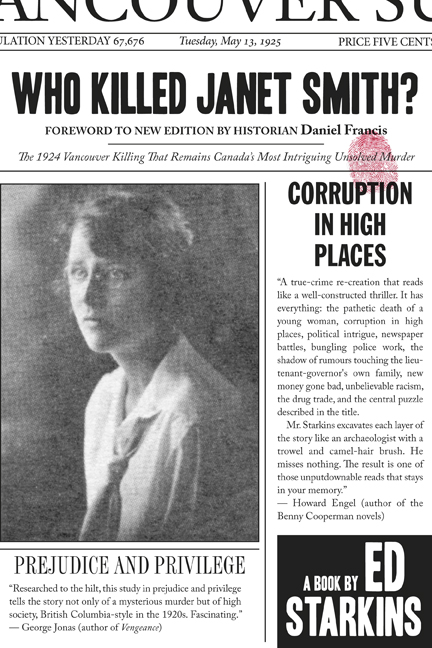 Who Killed Janet Smith? examines one of the most infamous and still unsolved murder cases in Canadian history: the 1924 murder of twenty-two-year-old Scottish nursemaid Janet Smith. Originally published in 1984, and out of print for over a decade, this tale of intrigue, racism, privilege, and corruption in high places is a true-crime recreation that reads like a complex thriller.

We are pleased to be reissuing this title as part of the City of Vancouverâs Legacy Book Project. This new edition features a Foreword by historian Daniel Francis.

âStarkins has written an engaging and well-crafted popular social history of Vancouver in the ostensibly hopeful, materially buoyant âflapper eraâ between the end of the slaughter of the Great War and the onset of the Depression. He reveals the serious fault-lines and profound anxieties of a community emerging in this decade from both its recent frontier past and a costly war into becoming a settled North American city. … this is a very worthwhile and informative case study, one that is likely to keep the conundrum in the title alive and encourage further research on the topic. … And who did kill Janet Smith and why? Despite the authorâs attempt to follow up as many leads as he could find, the answer remains elusive. Despite the presence of a smoking gun, whose hand pressed the trigger is still a mystery, although in an updated afterword Starkins warms to one explanation. As with all mysteries, that should remain for now a mystery.â — BC Studies

âMr. Starkins excavates each layer of the story like an archaeologist with a trowel and camel-hair brush. He misses nothing. The result is one of those unputdownable reads that stays in your memory.â â Howard Engel

âResearched to the hilt, this study in prejudice and privilege tells the story not only of a mysterious murder but of high society, British Columbia-style, in the 1920s. Fascinating.â â George Jonas

âStarkins cuts away at the layers with the delicacy of a neurosurgeon. What he uncovers almost defies belief.â â Quill & Quire

Full index from the book [PDF]