Viral Suite explores our relationship with self, other, environment, space, and time. The sensual and the cerebral. How the we/here/now is evolving and mutating with each downloaded packet.


“The poems in Viral Suite are exuberant in their exploration of the body as âa vast zone of sensation,â including a palpable face-to-face throat singing with the poem as a body, proprioceptive and linguistic, and always right in front of us. Mari-Lou Rowley takes us down a homeo path of scientific and poetic lyric in an amazement of molecular dance through the lush genetics of life on the move. Very contagious stuff.”
— FRED WAH


âThe sciencing of language and the figurative elaboration of science in Viral Suite give the book an honest, raw energy. Rowleyâs destinations are various and startling, but in grappling with our precarious grasp on the world, she comes, literally, to terms.â
â VALLUM


âIt is rare to see science and poetry mixed as seamlessly as they are in Mari-Lou Rowleyâs Viral Suite, but not surprising for Rowley, a science and technology writer. The linguistic gymnastics and energy of the verse is at its best when she combines the world of physics, mathematics and molecular biology with real physicality; as in the third section, âElucidata.â Visceral gems such as âSex in Space Timeâ allow language and image to do their work without interference from the empirical voice, âFor the same reason the earth revolves around/ the sun, a hand falling through any arc of/ air will choose the swelling mass of thigh/ over nothing, for warmth/ for meaning.â
â THIS MAGAZINE

Mari-Lou Rowley has published eight previous collections of poetry, most recently Suicide Psalms (Anvil Press), which was shortlisted for a Saskatchewan Book Award, and Transforium (JackPine Press) in collaboration with visual artist Tammy Lu. Her work has appeared internationally in literary, arts, and science-related journals including the Journal of Humanistic Mathematics and Aesthetica magazineâs Creative Works Competition anthology. Unus Mundus was awarded second prize in the 2012 John V. Hicks Long Manuscript Award. She is currently pursuing an interdisciplinary PhD at the University of Saskatchewan in new media, neuroplasticity, and empathy. 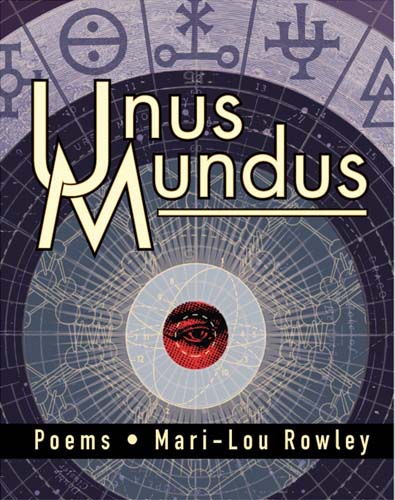