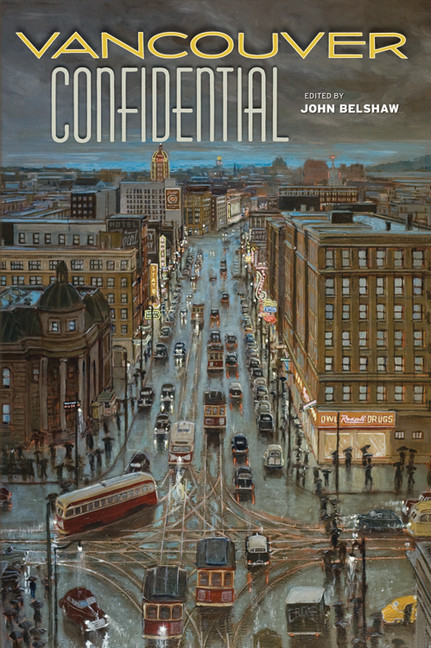 Vancouver Confidential is a collaboration of artists and writers who plumb the shadows of civic memory looking for the stories that donât fit into mainstream narratives.

We honour the chorus line behind the star performer, the mug in the mugshot, the victim in the murder, the teens in the gang, and the âslumâ in the path of the bulldozer.

By focusing on the stories of the common people rather than community leaders and headliners, Vancouver Confidential shines a light on the lives of Vancouverites that have for so long been ignored.

Contributors: Tom Carter on Vancouverâs Entertainment Czars, Aaron Chapman on wartime fears in Vancouver during WWII, and the sins of Alderman Halford Wilson; Jesse Donaldson explores the case of the Loversâ Lane Marauder, James Johnstone revisits old Strathcona through the eyes of long-time resident Lucille Mars; Lani Russwurm investigates the âRed Shadowsâ and the 1930s communist scare with a spyâs eye view of Vancouver; Eve Lazarus probes the 1928 Lennie Commission into police corruption and all of its ensuing ramifications; Diane Purvey addresses the strange case of Viola Woolridge and how the mores and legal system of 1947 resulted in Viola (or at least her character) being put on trial for her own murder; Catherine Rose takes us back to the Dirty â30s and shines a light on the âunholy trinityâ of Police Chief John Cameron and gangsters Joe Celona and Shue Moy; Rosanne Sia looks at a 1931 Pender Street cafÃ© murder/suicide that resulted in a ban on the hiring of white waitresses in Chinatown restaurants; Jason Vanderhill reveals the little-known story of Joseph Kennedy Ltd. and the liquor interest in 1920s Vancouver; Stevie Wilson on the staggering unemployment, relief camps, and Hobo Jungles of 1931; Will Woods on Mayor Gerry McGeerâs transformation from iron moulder and labour activist to controversial mayor and reader of the Riot Act; Terry Watada on Etsuji Morii, the âAl Capone of the Japanese community,â and the Black Dragon Society of Japantown and John Belshaw pays triubute to early Vancouver street photography and the work of James Crookall.