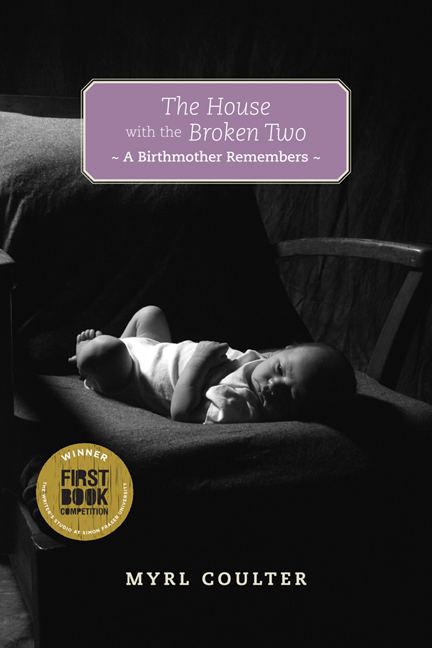 The House with the Broken Two: A Birthmother Remembers

Unmarried and pregnant in 1968 Winnipeg, teenager Myrl Coulter found herself at a loss. Unable (and perhaps unwilling) to support her child, Myrlâs parents forced her to give the baby up for adoption. After being sent to a home for unwed mothers, Myrl gave birth in a desolate hospital room and then found herself at the mercy of a closed adoption process that seemed determined to punish her. Myrl was left numb and filled with questions that no one was able to answer.


In The House With the Broken Two: A Birthmother Remembers, Dr. Myrl Coulter reflects on the family politics and social mores that surrounded closed adoption in the 1960s, and examines the changing attitudes that resulted in the current open adoption system and her eventual reunion with her first-born son. The book is an intimate, honest look at the way personal histories combine with political truths, and Coulter mixes revealing personal details with sharp political observations. The House With the Broken Two could be called a personal essay or a feminist apologia, but perhaps most importantly, it is a book about motherhood, in its many variations.


Praise for The House with the Broken Two


“A memoir, an adoption narrative and a grief mosaic, this winner of Simon Fraser University’s 2010 First Book Competition is a beautifully written volume in the genre of creative non-fiction.”
—The Winnipeg Free Press


“The House with the Broken Two portrays a vivid and unsettling picture of Canadian sexual politics and social policy as it related to the consequences of extramarital sex. Before World War II the public and private agencies made small attempts to keep single mothers and their babies together, but when the 1950s paradigm of the perfect nuclear family took hold in North America attitudes changed. ‘Girls like me were not young women who needed a helping hand,’ Coulter writes. ‘Instead we were seen as somehow delinquent and definitely unfit as mothers.’”
— The Rover


“Coulter wrote this book for her birth son as a way to fill in the gaps between the time she gave him up and when she finally met him again as a thirty-something adult. Many readers will be heartened by Coulterâs story and her later achievements. Not only does her memoir examine an historic social phenomenon, it also demonstrates how young women have the ability to change the trajectory of their lives and embrace success. Social workers and teenage mothers in particular will find this story of interest.”
— Prairie Fire

Myrl Coulter was born in Winnipeg, Manitoba. She has a PhD from the University of Alberta where she taught in the Department of English and Film Studies for eight years. She won a 1995 National Screen Institute Drama Prize for her short screenplay Willpower. In previous careers, Myrl has been a cashier, a bank clerk, an X-ray technician, a stay-at-home mom, a receptionist, a sales representative, a small business owner, and a stills photographer in the film industry. She has been a writer all her life. Myrl lives in Edmonton, Alberta.