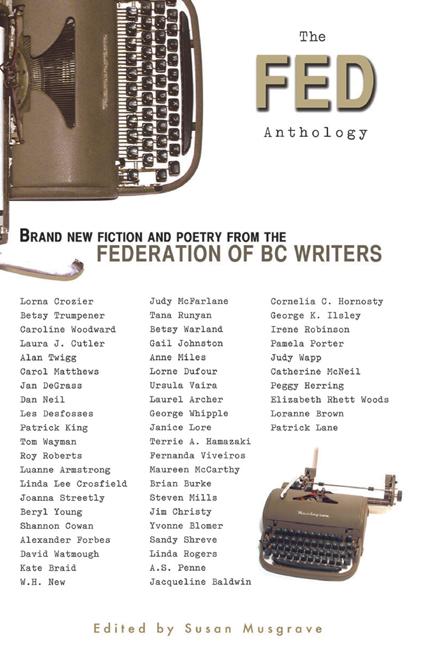 The Fed Anthology: Brand New Fiction and Poetry from the Federation of BC Writers

With a thousand members throughout the province, the Federation of BC Writers is one of the most active and vigorous writers’ organizations in the country. The Fed Anthology, edited by Susan Musgrave on the occasion of the group’s 25th anniversary, is a colourful bazaar of previously unpublished fiction and poetry by nearly 50 of those members. Like the Fed itself, the book includes both authors whose names are instantly familiar to all readers of Can Lit and others who are emerging only now to take their place as the next generation. The country has learned to turn to British Columbia when taking the pulse of Canadian writing. The Fed Anthology is a lively part of the process. The anthology features work by Tom Wayman, Sandy Shreve, Len Dufour, Steven Mills, Peggy Herring, Loranne Brown, Linda Rogers, Jim Christy, Kate Braid, Lorna Crozier, Caroline Woodward, Ursula Vaira, Patrick Lane, Luanne Armstrong and many others.

Susan Musgrave, the author of more than 25 books including What the Small Day Cannot Hold: Collected Poems 1970-1985, has won numerous prizes, including the CBC Award for Poetry and the bpNichol Poetry Chapbook Award. She has been a writer-in-residence at universities across Canada and has given readings around the world. She lives on Vancouver Island.