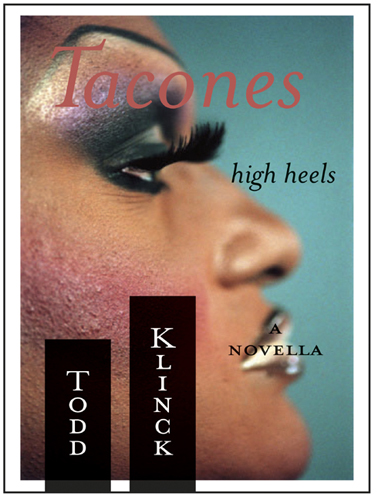 Tacones is a hangout for a subculture of outlaws and rejectsâcrackhead murderers, transvestite prostitutes, biastogerontophiles, hustler boys, and addictsâall painfully beyond denial, searching for connection, solace, humour, thrills, sex, and the perfect high. A rollicking and caustic romp through the violent and ambivalent world of the Toronto after-hours scene. Descend, if you dare…

Tacones was first published in 1997 after winning the 19th annual 3-Day Novel Contest. It was immediately praised for its raw, unflinching portrait of an underclass and was compared to John Rechyâs City of Night.

Tacones feels as disturbingly fresh as it did ten years ago and it seemed a fitting time to reissue this scurrilous little novel, warts and all.

Todd Klinck is a writer, film artist, former sex-trade worker, and co-owner of Mayhem North, an adult video company. His regular column âTradeâ ran for three-and-a-half years in fab magazine, and he has been the subject of feature articles in Xtra, Advocate, Now, the Toronto Star, and The Globe & Mail. Todd also appeared on Showcaseâs alternative lifestyle program, Kink. He co-authored the screenplay for the Genie-nominated feature film, Sugar and is currently working on an as-yet-untitled screenplay based on Tacones and a second novel, Us Whores. He lives in Toronto.