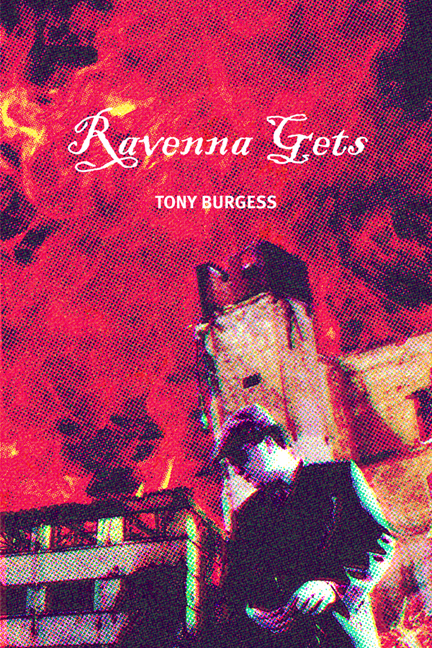 From the author of Pontypool Changes Everything, Ravenna Gets is a new collection of âwheeledâ stories that continue the authorâs exploration of âapocalypse ï¬ction.â

There is one thing missing, however, as the bodies fall from what might have been better stories, better novels, and itâs this: everything.

â…out on the edge and experimental to the point of reader-confusion, but surprisingly alluring. When taking a reader to the cliff edge, then the writing must be as enticing as chocolate even if the story smells bad. I donât get it and I didnât enjoy it, but I couldnât look away: This poetic, fast-flying nihilistic narrative of carnage is well done.â
â Globe & Mail

âRavenna Gets, in particular, concerns itself with sudden and convulsive deaths; Christmas reading this is not. Many of the tales, which are all named after an address in Collingwood, begin like a standard short story – what Burgess calls âthe lightness and the pointlessness of establishing lifeâ – before its characters are suddenly dispatched in a variety of ghoulish ways.â
â The Ottawa Citizen

âBurgess has accomplished much in this collection in that he has had to surmount the structural and aesthetic difficulties attendant in the (mostly stupid) horror genre. The writing, in other words, is what saves Ravenna Gets from the shotgun pump book dump.â
â Brian Palmu (blog)

âTony Burgess sits in infinite judgement on rural Ontario life, insisting with infuriating calmness that not even one fine red curly hair separates the poetry of mundane existence from sudden, inexplicable violence. Ravenna Gets belongs on the same shelf as Lesyâs Wisconsin Death Trip and Springsteenâs Nebraska.â
â Darren Wershler, author of Guy Maddinâs My Winnipeg, and, with Bill Kennedy, Update

âIn Ravenna Gets, Tony Burgess is up to his old, sick, satisfying tricks. Small Ontario towns are whacking each other with more gore than Hostel, more pitchforks than American Gothic. This is a pitiful excuse for literature and Tony Burgess is our only hope.â
â Clint Burnham, author of Smoke Show and Airborne Photo

Tony Burgess is the author of The Hellmouths of Bewdley, Pontypool Changes Everything, Caesarea, and Fiction For Lovers. His writing has been featured in numerous anthologies and magazines across the country. Most recently, Tony was nominated for a Genie Award for Best Adapted Screenplay for Pontypool. He lives in Stayner, Ontario.