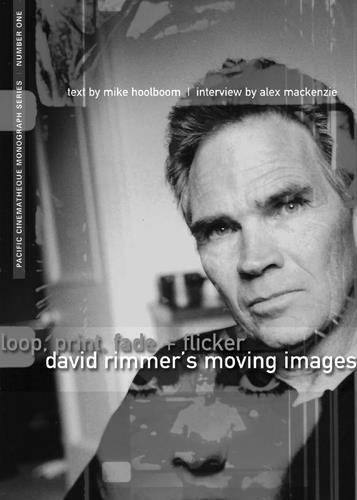 The Pacific CinÃ©mathÃ¨que Monograph Series was initiated to explore the spectrum of contributions and innovations of Western Canadian filmmakers, videomakers, and fringe media artists. Monograph Number One focuses, fittingly, on David Rimmer, one of Canadaâs foremost experimental filmmakers.


PRAISE FOR RIMMERâS WORK:
There is no better way to start off Pacific CinÃ©mathÃ¨queâs Monograph Series, celebrating West Coast filmmakers, than with the work of David Rimmer. Mike Hoolboomâs essay tantalizes us with a romantic myth that contextualizes David, while Alex MacKenzieâs interview lets the artist speak for himself. Both offer a unique insight into the art practice of one of the most influential Canadian filmmakers of the 20th century.
â Ann Marie Fleming,
independent filmmaker and visual artist


For David Rimmer, film is a way of seeing, a way of experiencing life. And there are no two better filmmakers to take us on this journey of coming to understand Rimmer and his practice than Mike Hoolboom and Alex MacKenzie. Before there was even the awareness of a filmmaking culture in Canada, one âmore concerned with dramatics,â Rimmer was breaking the rules as they were being made. Working with film as a canvas, Rimmerâs works are technical experimentations incorporating found footage, optical and contact printing and hybrid film and video forms. Like that other Economics major turned self-taught filmmaker, Guy Maddin, Rimmer is a seminal Canadian filmmaker and a must-study for any student of Canadian cinema.
â Cecilia Araneda,
Executive Director, Winnipeg Film Group


[Rimmerâs] Surfacing on the Thames is a brilliant film which, in its way, belongs in the same class as Snowâs Wavelength. Iâve never seen anything like it â¦ the ultimate metaphysical movie.
â Gene Youngblood, ArtsCanada magazine


The most exciting non-narrative film Iâve ever seen â¦ images become polarized into grainy outlines, like drawings in white or colored chalk which gradually disintegrate and disappear. The film [Variations on a Cellophane Wrapper] resembles a painting floating through time, its subject disappearing and re-emerging in various degrees of abstraction.
â Kristina Nordstrom, The Village Voice

Mike Hoolboom (Essay) is a Canadian film/video artist. Heâs the author of three books: Plague Years (1998), Fringe Film in Canada (2000), and Practical Dreamers (2008). Heâs a founding member of the Pleasure Dome screening collective (Toronto), and has worked as the artistic director of the Images Festival (Toronto) and the experimental film co-ordinator at Canadian Filmmakers Distribution Centre (Toronto). Heâs won over 30 international prizes, two lifetime achievement awards, and has enjoyed nine international retrospectives of his work.

Alex Mackenzie (Interview) is a Vancouver media artist working with light projection and expanded cinema. He was the founder and curator of The Edison Electric Gallery of Moving Images, The Blinding Light!! Cinema, and The Vancouver Underground Film Festival. His live media works are presented at festivals and underground screening spaces throughout Europe and North America. He is the co-editor of Damp: Contemporary Vancouver Media Art (Anvil Press, 2008).