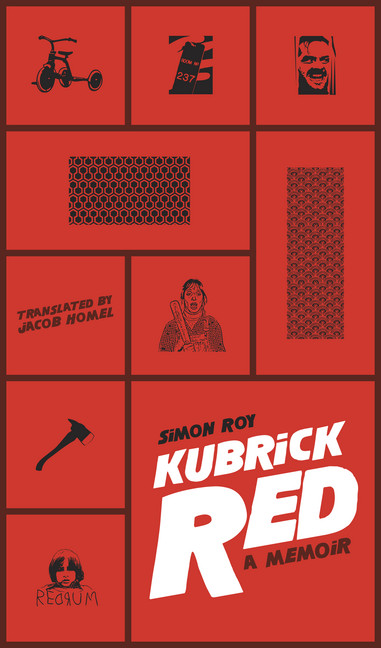 Stanley Kubrickâs film The Shining was released in 1980 and has been fascinating viewers ever since. It is a psychological thriller about a writer with writerâs block (along with his wife and their young son) who takes a job as caretaker of an isolated hotel in the Colorado mountains during the winter off-season. The boy, Danny, is gifted with a âsixth senseâ and soon begins receiving disturbing messages about the hotelâs mysterious past, and thus begins a cinematic descent into madness and terror.


Simon Roy first saw The Shining when he was ten years old and was mesmerized by a particular line in the movie spoken by Dick Hallorann, the chef of the Overlook Hotel, while he is giving the family an orientation tour of the facilities. Hallorann seems to speak directly to Danny (and Simon Roy) while in the middle of enumerating the stock of the hotelâs pantry to Dannyâs mother. He glances at Danny and the words cross telepathically into the boyâs mind: âHowâd you like some ice cream, Doc?â


Roy encountered the scene by chance, while idly flipping through the channels on the television, but the short scene left an indelible mark upon him: âThe doubling of Chef Hallorannâs voice created in me such powerful unease that I can still feel it, intact, thirty years later. â¦ I felt like Hallorann had for a moment drawn back from his role as the guide of the Overlook Hotel to establish a direct relationship with me and reveal something hidden.â


Roy has since seen the movie over forty-two times, and the painstaking bond he has knitted with this story of evil has enabled him to absorb the disquieting traits of his own familyâs âmacabre lineage.â Analysis of the film, and the many parallels to his own familyâs troubled history, have allowed him to gain insight into the nature of domestic violence.


WHAT THE REVIEWERS HAVE TO SAY:


“Few books walk the space inhabited by Simon Royâs Kubrick Red. At once obsessive, dark, philosophical, academic, and touching, Kubrick Red is a bizarre memoir that manages to deconstruct and celebrate Stanley Kubrickâs The Shining while laying out the hardest moments of Royâs life as well as the continuing impact the film has had in his life. The result is a book that jumps from childhood memories to scene analyses to hybrid/experimental literary territory to coping with the loss of a loved one, and it does so with an ease and grace rarely seen in a debut. …”
— Gabino Iglesias, Vol. 1 Brooklyn


“… itâs hard to find parallels elsewhere in literature. … both Les Ãditions du BorÃ©al, the bookâs original publisher, and Vancouverâs Anvil Press deserve credit for taking on a book which resists categorisation … [a] strange and occasionally brilliant book, which mashes up elements of film theory, genre thrillers and a lament for his dead mother with reflections on his troubled childhood.”
— VANCOUVER SUN


“Kubrick Red: A Memoir does a deep dive into Kubrickâs methods and aims (he and co-screenwriter Diane Johnson wanted to craft a filmic embodiment of Freudâs ‘Das Unheimliche’ essay, apparently) even as it explores questions of how we use art in our lives. The latter is an especially charged question for Roy, whose family background is marked by dysfunction and tragedy: ‘To make suffering aesthetic is to avoid looking horror directly in the eye â¦ to repel its deadly impact by placing between real horror and my tormented mind a 140-minute movie. Make it absorb the hardest blows.’ Roy has seen The Shining at least 42 times. That might strike some as unhealthy, but it has worked for him in at least one way: with Kubrick Red, he has made something compelling of his fixation.”
— MONTREAL GAZETTE


“On first viewing, The Shining barely coheres: Itâs hard to say why exactly events in the film happen as they do. Yet long after, it remains deeply unsettling. Mother and child survive, but the axe-wielding fatherâs death offers no finality. When Simon Roy was a boy, he caught The Shining on television. The deluge of blood made no impression, but when Dick Hollorann asked in slow-mo voice-over âHowâd you like some ice cream, Doc?â young Simon was sure the hotel chef spoke directly to him. Since that moment of being scared witless, Roy has watched Kubrickâs film obsessively, finding new meaning in it and dark parallels with his own story. Just as Kubrick used Stephen Kingâs novel to talk about the horrors of genocide revisited on the present, in Kubrick Red Roy analyses the film to exorcise a crime in his familyâs past. An atypical memoir tracing genealogies of violence â as startling as the film that inspired it.”
— GLOBE & MAIL

Simon Roy is professor of literature at Lionel-Groulx College in Sainte-ThÃ©rÃ¨se, Quebec. Kubrick Red: A Memoir is his first book.