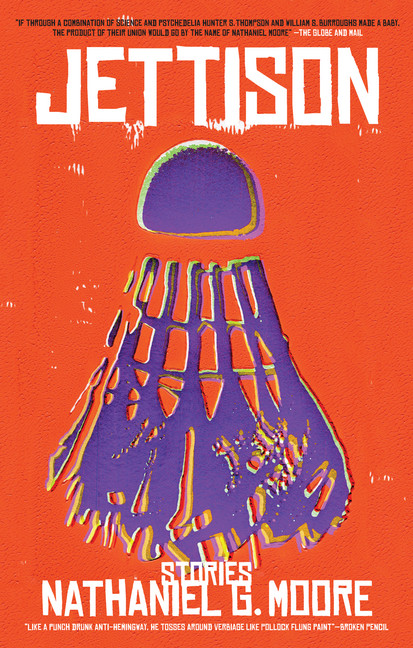 Nathaniel G. Moore follows up his 2014 ReLit Award win for Savage with a diverse collection of short fiction, his first — Jettison, featuring stories which dangle somewhere between horror and romance.
âJawsâ explores a fatherâs desire to over-share the erotic origins of his childrenâs âAuntâ Louise; âBlade Runnerâ uncovers the darkest and most hilarious aspects of dating by delineating the psych ward politics surrounding a male mental patient with five girlfriends who take apart his bed when they visit; in âA Higher Powerâ readers are introduced to a brave woman in recovery who shares a story about a time when all she could think about was Prime Minister Paul Martin and would do anything to crash charity dance-a-thons he might be attending; in âSon of Zodiacâ Moore captures the ache of a life-spanning meltdown in the painfully polite confessions of a man who believes his father was the Zodiac Killer. Be grateful as you witness a portrait of vulgar torment when a young woman is given an English professor action figure for Christmas in âProfessor Buggles.â


Each of these stories is an all-inclusive getaway to hilarity and emotional atonement — Jettison is an all-you-can-eat buffet of literary invention: youâll be so glad you got an invite.


And check out Jettison.ca for all things Jettison!


WHAT FOLKS ARE SAYING ABOUT JETTISON:


“Nathaniel G. Mooreâs first short-story collection is certainly not for everyoneâs taste, but is a good introduction to the British Columbia-based writer whoâs been compared to Philip K. Dick and William S. Burroughs … wickedly fun to read.”
— Winnipeg Free Press


âJettison is not a pull-your-hair-out-and-run-out-the-door-screaming-horror-show, but rather an entertaining whirlwind of premise, playing with familiar tropes such as family reunions, romantic fallouts, our role in destroying the world, and our obsession with chaos, conflict and communication.â
—Small Press Book Review


“Jettison is nothing if not daring, and the ‘Screw you, letâs get weird’ approach smacks equally of New Narrative writers and high-end sci-fi. When the total flippancy thing is done well, itâs actually hilarious.”
âThe Winnipeg Review


“I read ‘The Thorncliffe Strangler’ expecting violence. The title, I thought, warned it. Instead, Moore writes about a friendship. The memory of it, its nostalgia. There are funny moments and moments that point to deep wells of sadness, to the parts inside us either lost or absurd. Meanwhile, at the edge, an apocryphal strangler hovers. What he represents to you will, of course, depend on your experience with stranglers.â
â Chelsea Rooney, author of Pedal


“Dark humour and wet lustâMoore takes us from the height of human feeling with a flashbulb love story and cold-cocks us with a festering Floridian bug bite and the Ontario cold.”
-Evie Christie, author of The Bourgeois Empire

Nathaniel G. Moore is the author five previous books including, most recently, Savage 1986-2011 (Anvil Press), winner of the 2014 ReLit Award for best novel. He is the lead singer of the non-fiction electro-folk band Proper Concern with Warren Auld. He currently lives on BCâs Sunshine Coast with his partner and daughter and works as a book publicist full-time. 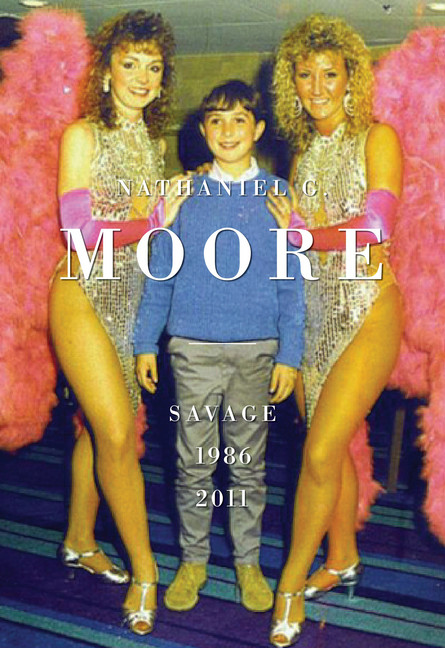