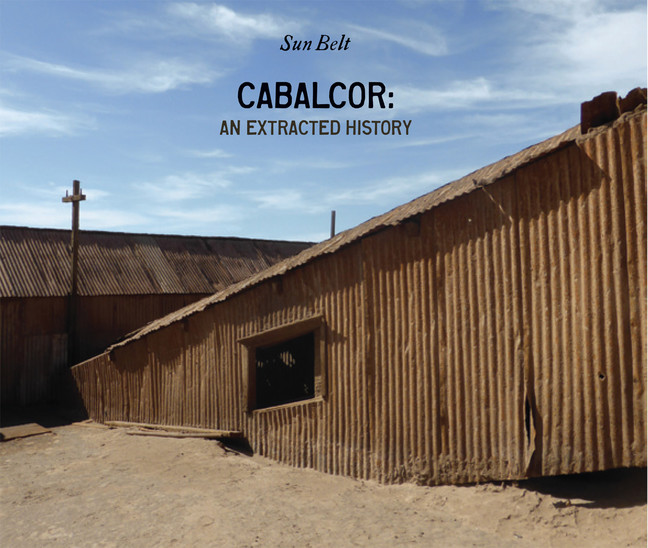 Sun Beltâs collaborative work of fiction is a genre-defying chronicle of a tar sands company town. Drawing from an array of invented sources such as journals, film transcripts, environmental studies and police reports, Cabalcor charts the rise and fall of a mythical boomtown that, within the span of a century, becomes a desert wasteland.

The multi-layered narrative is woven together by an extraordinary blend of texts, both black and white and colour images, and a full downloadable album of Sun Beltâs quietly surreal, dusty music.

Rick Maddocks is a writer, composer and singer. Before founding Sun Belt in 2013, he wrote and performed in The Meal, an experimental opera that debuted at the PuSh International Performing Arts Festival (Vancouver) in 2011 and was restaged at Pacific Theatre in 2012. He also wrote and produced atmospheric roots band The Beigeâs two releases, 01 and El Ãngel Exterminador. His collection of linked stories, Sputnik Diner, was published by Knopf Canada/Vintage. He teaches creative writing at Douglas College.


Stephen Lyons: Juno-award winning multi-instrumentalist/composer Stephen Lyonsâ iconoclastic work is at the forefront of Vancouverâs creative music scene. Known mainly for his work with the seven-piece avant-rock group, Fond of Tigers, Lyons is also an improviser, producer and presenter of creative music. A member of the Merge music collective, Lyonsâs other projects include Cloudsplitter, Dixieâs Death Pool, Cassette Merchant, and Limbs of the Stars.


Carrie Walker is a visual artist based in Vancouver. Her practice is strongly rooted in drawing, often employing images of non-human animals as metaphors for the human animal. Humour and playfulness are vital elements in her workâwhether pen-and-ink drawings of the faces of rodents and chickens or fantastical, fragmented narratives created by painting animals onto landscape paintings bought on Ebay. She has exhibited her drawings in New York, London, Los Angeles and Vancouver. She currently teaches drawing at Emily Carr University.


Dave Wilson is a painter, graphic designer and illustrator living in Vancouver. His main subject matter is cityscapes of India presented through the medium of watercolour. He is also currently working on childrenâs books.


Paul Rigbyâs composing, arranging and musicianship on Neko Caseâs latest album The Worse it Gets, the Harder I Fight. . . earned a Grammy nomination (Best Alternative Album). His guitar playing is a meld of influences ranging from African pop to jazz, country and rock and roll. Paul has a B.A. in Jazz Pop Performance and has been playing for thirty years, spending the past twelve years touring and recording with a multitude of acts such as Neko Case, AC Newman, Mavis Staples, Garth Hudson, Carolyn Mark, and Calexico.


Jon Wood spends much of his time exploring the ins and outs of record productionâfor his own Flophouse Jr. project and a growing number of independent Canadian artists including Herald Nix and Rae Spoon. Heâs recently collaborated on a multimedia performance piece with Ivan Coyote and also toured the UK with longtime musical partner Cam Penner. Wood is also putting the finishing touches on a new Flophouse Jr. recording.


Sandra Carvalho GonzÃ¡lez is an illustrator and engraver based in Seville, Spain. Her practice has recently involved pen-and-ink drawings of plant shadows rendered on found media such as old books and computer paper. Her work has been exhibited in Madrid, Lisbon, Seville and MÃ¡laga.