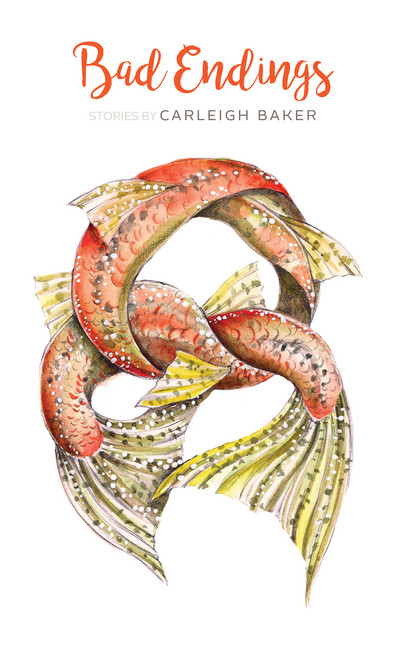 Carleigh Baker likes to make light in the dark. Whether plumbing family ties, the end of a marriage, or death itself, she never lets go of the witty, the ironic, and perhaps most notably, the awkward. Despite the title, the resolution in these stories isnât always tragic, but itâs often uncomfortable, unexpected, or just plain strange. Character digressions, bad decisions, and misconceptions abound.

While steadfastly local in her choice of setting, Bakerâs deep appreciation for nature takes a lot of these stories out of Vancouver and into the wild. Salmon and bees play reoccurring roles in these tales, as do rivers. Occasionally, characters blend with their animal counterparts, adding a touch of magic realism. Nature is a place of escape and attempted convalescence for characters suffering from urban burnout. Even if things get weird along the way, as Hunter S. Thompson said, âWhen the going gets weird, the weird turn pro.â

In Bad Endings, Baker takes troubled characters to a moment of realization or self-revelation, but the results arenât always pretty.

âIn Bad Endings, Carleigh Baker has created a skillfully woven tapestry of stories, centred on strong, contemporary female characters battling for agency over their own lives. … These stories are not about happy endingsâthey are about powerful endings, and we found them nothing short of electrifying.â — 2017 Rogers Writersâ Trust Fiction Prize Jury

âStumbling through the fogs of loneliness, Carleigh Bakerâs finely drawn characters find respite in the particular intimacy afforded by ephemeral relationships. A renewal of connection with the more-than-human world offers the characters sustenance amidst the demands of an ever-accelerating city.â — City of Vancouver Book Award (Jury citation)

âHer characters possess an abundance of hard-luck stories, true, but she writes them as sometimes wrong and sometimes foolish and hence eminently human in their fallibility.â — The Georgia Straight

âThings are on the edge, askew, as they are in every story in Carleigh Bakerâs debut collection, which features rushing rivers and waves splashing on the shore … Because bad endings make for good endings, story-wise, leaving possibilities open, the characters on the cusp of something, always something around the next corner, a blessing and a curse.â â Pickle Me This

âThe dichotomies of bad news and good news, reality and fantasy, the banal and the sublime, are in Bakerâs debut a patchwork quilt of intermingling patterns. It takes a brave voice to, for example, pair the stylistic pyrotechnics of âPostcards in a Gonzo Journalist Voiceâ with the anti-climactic, but weirdly satisfying, âMoosehide,â where the expected epiphany of urban-dwellers exploring nature turns that skewed mirror of Bakerâs to her readers. There never seem to be any answers in the stories in Bad Endings; rather, the questions Baker poses are of such quiet magnitude that we donât need them.â — Matrix Magazine

âBaker is a skillful, sensitive writer with an uncanny gift for subtle, dark humor and the ability to assume the viewpoint of her characters, whether a small child contemplating death; a father watching as his pregnant daughterâs abusive marriage spirals out of control; a woman running from a âgoodâ husband; a woman just released from the psych ward who takes a look at whatâs out there and decides she may not be ready after all; or people in relationships as superficial and fragile as a skiff of ice at the edge of a lake that the pale sun cannot seem to warm. There is no judgment or condemnation in these stories, but a tender, deep savoring of the quirks that make us human.â — Foreword Magazine

âBad Endings is a deft and humorous portrayal of twenty-first-century humansâ lack of connection with nature, our authentic selves, and each other.â — The Malahat Review

Carleigh Baker is a Metis/Icelandic writer. Her work has appeared in subTerrain, PRISM International, Joyland, and This Magazine. She won subTerrainâs Lush Triumphant Award for short fiction in 2012, and was nominated for the Journey Prize in 2014. Her book reviews and critical writing have appeared in The Globe & Mail, The Malahat Review, The Goose, and EVENT magazine. She lives in Vancouver.